Built From the Ground Up: SteelMart Finds Growth in Retail Approach

“We basically just had some rusty old steel and an old forklift,” Brian Satisky recalls.

That was back in 1996 when Satisky’s former college roommate, Paul Carling, told him he had started a steel company and needed some help.

“It was just an idea,” Carling says. “We didn’t know whether it would work or not.”

The firm that got its start selling cut-rate steel to industrial customers is now a fast-growing success story. Satisky and Carling, the company’s principals have built a company based on providing top-quality service to customers in need of steel. This year the company was honored as one of Inc. magazine’s 5000 fastest growing private companies in the U.S. and one of the 500 fastest growing private companies in the Southeast.

Carling’s initial idea back in 1996 was to start his own metal scrap yard, but he noticed that small and medium-sized companies often needed to buy very specific steel pieces and had relatively few options.

“We said ‘let’s take it to the next level and lay the steel out in a way that’s easier to access and make it a little more user-friendly and at the same time develop a customer base,'” Carling says.

That same year Satisky, a fellow University of Georgia grad, joined his college buddy working on a small industrial lot in the Gwinnett section of Doraville. They had a truck, a single forklift and a torch for cutting pieces of steel.

“I needed some help, and he came around to come help me out,” Carling says. “He wasn’t thinking it would be a permanent situation, but it’s a good mix. I’m kind of the operations guy, and Brian handles the finances. We’re two opposites.”

In the early days, the pair would buy any steel they could get. That meant stocking “milled seconds,” the imperfect beams, rods and sheet metal that they could re-sell.

“Back then we just went out and got whatever we could afford,” Satisky says, as he walks through the company’s bustling headquarters off Buford Highway. “We went to auctions and would buy surplus steel.”

While the duo started off small, Satisky says SteelMart’s growth has been due to its ability to provide better customer service. After all, steel is steel.

He remembers one customer in the early days who needed to make a last minute purchase, which Satisky and Carling were able to handle. The next day the customer came back and placed an order for $10,000 worth of steel – the company’s first big order.

“That order only happened because we took care of him,” Satisky says.

Nowadays SteelMart has a fleet of 10 delivery trucks and 35 employees who work at its Doraville headquarters as well as a satellite warehouse in Gainesville. Revenues have grown from $180,000 in SteelMart’s first year to $10 million last year.

SteelMart’s products have all kinds of uses, everything from commercial construction to repairing heavy machinery. Nowadays the company buys certified “prime” steel from mills throughout the Southeast. At SteelMart’s warehouse, some of the steel is cut or bent to customers’ specifications. There is also a retail counter where customers can pick up any steel items that are in stock.

It’s a true retail operation. Unlike scrap yards or steel producers, SteelMart isn’t too affected by swings in commodity prices and no single customer accounts for more than 5 percent of sales.

“It’s about as simple a business as it gets,” Satisky says. “We buy steel and then we sell it.”

The founding
The company was created in 1997 when Paul Carling decided to start a business selling steel products. He soon partnered with his former college roommate from UGA, Brian Satisky.

In 2004, they opened a second location in Gainesville. In 2006, they completed construction on their new, 20,000 square-feet state-of-the-art service center in the Gwinnett portion of Doraville. Today, Carling and Satisky serve as the company’s principals, and Terry Morris is sales manager.

Company growth
Through all the growth Satisky and Carling have remained loyal to their employees.

“Our growth has been exciting, Paul and I look back over the past 12 years and we are thrilled. However both of us are still here everyday. We might not drive a truck or run a torch anymore, but we still know how,” says Satisky.

SteelMart processes, sells, and delivers steel to customers throughout the southeast U.S. 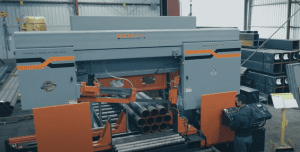 With a 44” width sawing capacity, SteelMart is able to process heavy structural steel with a higher degree of